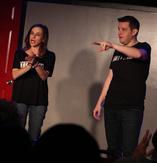 It all started at the turn of the 21st century when Suzanne held auditions for her new sketch comedy troupe Chicken Skratch.  When her first choice fell through, she called upon her second choice Wayne Henry, and the two have  settled for each other ever since.  Years later, but still the same century, they  emerged from Chicken Skratch as the comedy duo of Henry & Stein!

The comedic chemistry between the two was instant.  Each time one would come up with some outlandish character, the other would quickly create its complimentary mate. Their shows include sketches, impressions, song and dance.  The dynamic duo also host comedy shows and events simply as their "normal" selves and often working in their pairings of original characters.

With their uncanny impressions and outrageous yet endearing characters, they enjoyed a yearlong run at Rose’s Turn of their critically acclaimed sketch comedy show “Remotely Controlled” directed by Collette Black.  They have performed at Caroline’s on Broadway, The Upright Citizens Brigade Theater, Chicago City Limits, The Fringe Festival & a host of other comedy

venues.  Most recently, they appeared at SketchFest at The P.I.T. and have headlined several comedy benefit nights at Tierney’s Tavern, raising money for various local and national charities.