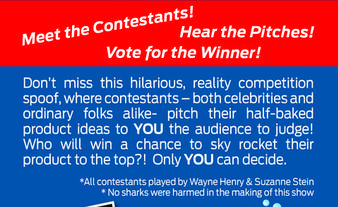 As a long time show producer for the tv show LIVE with Kelly & Ryan, an incredible perk of my job, is that I have exposure to hilarious people on a daily basis.  My bar for “funny” is held high.  When a close friend of mine invited me to a comedy show that I’d never heard of before, I was skeptical, but I went.

With that said, I had the great pleasure of seeing Henry & Stein’s “Shark Tank FEEDER SHOW” this past weekend at the Broadway Comedy Club (318 West 53rd Street).   This original sketch and improv comedy show was written and performed by Wayne Henry and Suzanne Stein and directed by Steven McElroy. They were joined and assisted by stand-up comic, Donna Vee.  The idea behind the FEEDER SHOW is that this is essentially the casting call for the television show Shark Tank.  There were a number of contestants (inventors) who pitched their products to the audience (who are the Sharks in this case).  The audience votes by applause for the product that will move to the next fictional round.

This show was nothing but an hour of pure and refreshing fun.  The show started with the delightful and energetic Stand-Up Comic Donna Vee warming up the crowd. Next Wayne Henry and Suzanne Stein took the stage to explain the idea of the FEEDER SHOW, sort of the rules etc.  The comedic chemistry between the two was evident from the very start.  And then came the “competition.” The characters played by Henry & Stein ranged from your high school Phys Ed and Science teachers, to your loud, obnoxious Italian neighbors, to the intolerable millennials you can’t stand waiting behind in line, and everyone in between.  They even had celebrities (again played by Henry & Stein) show up as contestants.  I was definitely surprised to see Ralph and Alice Kramden from the Honeymooners show up as contestants.   I will not give too much away about their product, but I will say that I felt like I was in the studio audience at the actual Honeymooner’s show in the 1950’s.  For those of you who know the Honeymooners television show you are in for a treat.  Henry and Stein’s impressions feel more like impersonations, they were dead on.  This was cool, it was as if they channeled the spirit of Jackie Gleason and Audrey Meadows.

And yes, Penny Marshall (Wayne Henry) and Cindy Williams (Suzanne Stein) were also contestants. The impressions here were more comedic than accurate, as Penny Marshall was played by Wayne Henry, but still funny none the less.   The audience, serving as the Sharks were able to ask the contestants questions about their products.  I actually had a bit of dialogue with “Penny Marshall” so there is something off of my bucket list.  At the end, Wayne and Suzanne came back on as themselves and were assisted by comic Donna Vee in the “voting” process.  The winners of this show were the argumentative Italian couple.  However, the obnoxious millennials were a close second.

I’ll say this.  The hour, or was it an hour and fifteen minutes, flew by.  This show was a good time.  Along with the rest of the audience, I laughed… a lot.  If you are looking for some inexpensive fun and good solid laughter ($15 cover plus a two drink minimum at Broadway Comedy Club) see this show.  The duo’s website at HenryAndStein.com lists their upcoming shows.  They seem to be in many different venues so pricing may vary.  Finally, thank you to my good friend Jenn for pushing me to see this show! 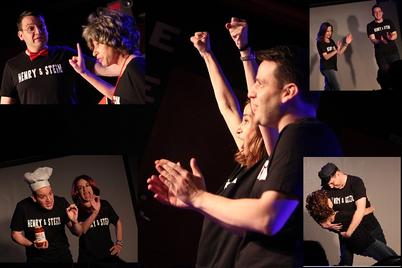